Free (Must be in the group) 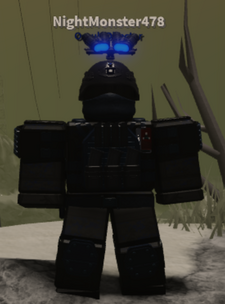 The Global Occult Coalition (GOC for short) is a Group of Interest team. The role of GOC is to protect the vault and warehouse from the Chaos Insurgency, as part of the Heist update:

The newest heist, nicknamed the “Vault Heist” has made its way into Area-47. Administrative Department members are responsible for putting files into the vault (they get paid per file!), the more files that are inside of the vault (max 100), the more the payout is for the raiders!

When raiding the vault, Chaos Insurgency have the option to go in and go guns blazing, or they can play it safe and destroy the exit door for the GoC, trapping them until the heist is completed! Be careful, this heist is a risky one, you have to protect yourself from SD, MTF, and GoC!
You definitely want to bring some friends along!

After raiding the vault, Chaos Insurgency can go and sell their confidential files to their merchant for a handsome payout!
- Description of the Heist from the changelog.

It is playable for anyone in CreepySin's SCPF group, but only two (2) players will be able to play as GOC Operative per server.

Community content is available under CC-BY-SA unless otherwise noted.
Advertisement